It All Started With A Rotten Banana

Posted on February 7, 2011 by robynthorn

Often I’ll go for a walk or run and lose sight of my surroundings as I get engrossed in what I am listening to which is usually a podcast from Radiolab.  Yesterday was an extremely nice day out.  I walked outside wearing shorts and a t-shirt thinking how funny it was that we all just survived a Texas “blizzard” only a few days ago.  I wasn’t even sure if I wanted to run or walk, but it was just too nice to spend the day in the house.  I started off down my street and turned right onto the main road heading further back into my neighborhood.  As I was walking along the same route I’ve traveled many times, I saw something strange on the ground that made me realize if I would just pay attention, there are probably countless things along the path that I never notice.  So yesterday, it all started with a rotten banana. 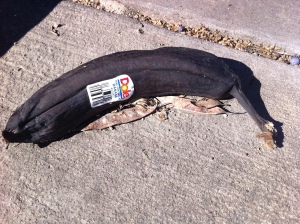 As I strolled along at a leisurely pace, I finally got to the part of the route that used to always kick my butt because of the incline.  Nowadays, I don’t find this hill much more difficult than a level road.  I continued along until I finally reached the very top of the incline.  From there, I decided it was time to walk again.  I turned from one street to the next just enjoying the sunshine and clear skies until I came to a small pond I’ve walked by numerous times.  This time I decided to stop for a moment and take in the view.

I decided this time that I would change up my usual routine and take the path that crossed over to the other side of our neighborhood.  For some reason I’ve had a thing with lampposts as I love taking pictures of them.  In fact, the picture at the top of my blog is one I took on a walk one day last year.  Since it had been a while between lamppost pictures, I decided it was time to update my collection, especially since the sun made it look like the light was on in the middle of the day. 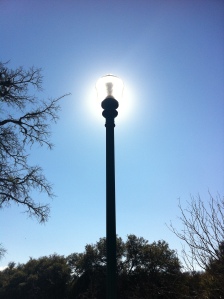 With it being the middle of Winter, the majority of the trees in the area are leafless.  I did however notice several with some interesting seed pods.  The first one I came across was covered in some white clusters that I had never seen before.

When you combine both sides of our neighborhood, there are a total of 904 homes.  There are many in the area that have artwork, fountains, and sculptures in their front yards.  I have probably walked by this one a million times, but today I decided to stop and really look at it for a moment. 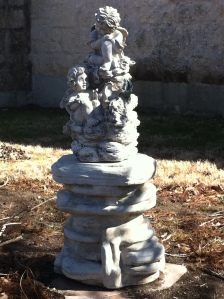 There was a slight breeze in a cloudless sky yesterday.  It felt good to have the sun on my face especially after last week’s wintery weather.  I decided to make a big circle on that side of the neighborhood so I continued across the intersection where the two main roads on that side intersected.  You’ll be happy to know that I chose not to take a picture of a dead squirrel that looked like it had made it across the street and just laid down for a nap.  As I turned left down the next street, I walked by several houses and found myself suddenly in the shade.  The difference in the temperature sent a shiver down my spine so I sped up a bit to get back into the sunshine.  There were a number of people out walking their dogs and I even saw a few washing their cars as well.  It was such a nice change to be able to get some fresh air without being all bundled up.  As I continued walking, I came across yet another tree with some interesting pods hanging from its bare branches.  Needless to say, these were…ahem…interestingly shaped.

Occasionally, we have people put flyers on our door letting us know that they are going to be painting street numbers on the curb if we would like it done.  Many people have not only taken them up on the offer, but have also had mascots for their favorite teams added.  Something tells me this person likes the Baltimore Ravens. 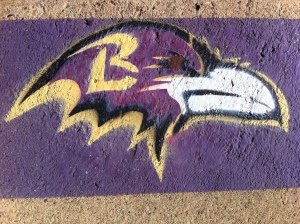 Now with yesterday being Superbowl Sunday, I did expect some early traffic, but this is ridiculous!  I hope they have insurance!

I was now on the lookout for something else as odd as the rotten banana I had seen at the beginning of my walk.  I decided to head towards the secret passageway from the west side of the neighborhood back to the east side where I live.  I’ve noticed lately that for some reason I tend to look down at my feet sometimes when I walk although I’m not sure why.  It’s not like they’re going anywhere that I’m not!  This particular downward glance at my feet turned out to be fortuitous as I discovered something odd melded into the asphalt.

In case you were wondering, that is in fact a razor blade encased in concrete.  Why?  I can’t think of a single reason.

Texas is of course known as The Lone Star State.  Because of this, you will find stars everywhere…even on Real Estate signs. 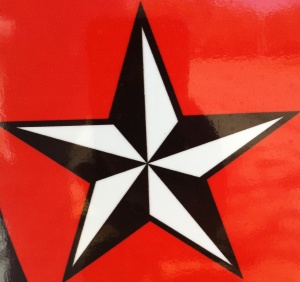 I was quickly coming to the path that would lead me back through the protected green belt to the east side of the neighborhood.  The funny thing is, if you don’t know that’s where it is you would probably just walk right by it.  There is simply a sidewalk that runs between two houses and comes out at the front of the subdivision.  Fortunately it’s lined with lampposts as well, so whether it’s day or night you can find your way back home.

I made it back across to the other side via the hidden path.  It was such a nice day out that I just wanted to keep going and it’s a good thing I have a bit of a stubborn streak because something was telling me to stop. 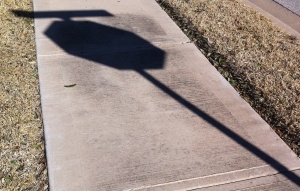 Walking down the main road back to my house, I happened to again be glancing down at my feet when I saw something so very sweet on the curb. 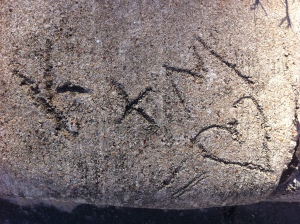 This made me wonder if this couple was still together as it didn’t look like it was recently created.

I decided to take the longer circle back to my house which meant walking to the last street, turning right, and then hiking down my street from the other end.  While out on a walk quite a while back, I happened to notice a tree along the way that looked a bit “R” rated and I have always meant to take a picture of it.  Every time I see this particular tree trunk it makes me giggle.  Tee hee hee! 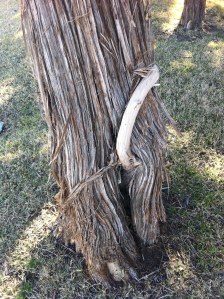 After about two hours outside in this fantastic weather, I finally made it home but I still wasn’t ready to go inside.  I chose instead to drop the tailgate on the truck and listen to some music while perusing the pictures I had taken on the day’s trek.  I thought it was odd that it looked like I was wearing hiking boots when in fact I wasn’t.

I’m not sure what it was yesterday that made me notice that rotten banana laying in the street, but I know that had I not paid attention, one of two things would have happened – either I would have stepped on it and cursed the person who threw it there or, most definitely, I wouldn’t have enjoyed this outdoor time as much as I did.  We all are usually in a hurry most of the time, but it is always a good thing to slow down every so often as what you may find might surprise you.  I hope that the next time you have the chance to enjoy some time outside that you’ll take the opportunity to really “see” the things around you as you never know what you might happen across.  It always amazes me how everything ends up where it does and I have always had an appreciation of nature.  I think Galileo said it best, “The sun, with all those planets revolving around it and dependent on it, can still ripen a bunch of grapes as if it had nothing else in the universe to do.”  It makes me wonder what a walk with him would have been like, what he could have shown me that I didn’t already notice on my own, and most importantly how many rotten bananas I would have missed in the process.

Robyn Thorn is just a girl learning that she’s perfectly normal after all these years. She has been blogging for several years and can often be found singing the night away at her local karaoke establishments. Although she has no children of her own, she is Aunt Bobbyn to many. She holds a Bachelor of Arts degree in Psychology and Communications and finds that this fits her personality perfectly. She is a certified Zumba® instructor, an ACE certified Group Fitness Instructor, and holds a Texas Secondary Teaching Certificate in Speech Communications. Robyn has also been a mentor with the Big Brothers Big Sisters of Central Texas since 2011. She is the author and publisher of "We're All Rubber Bands: Finding happiness with who you are."
View all posts by robynthorn →
This entry was posted in Uncategorized and tagged nature, outside, photos, seeing, walk. Bookmark the permalink.

1 Response to It All Started With A Rotten Banana

Find yourself, and be just that

Tales from the mouth of a wolf

From a girl who lost her mind

Your Body, Energy and Mind Blog

A journey to love myself first

Taking the anxiety out of Algebra and transforming classroom instruction

She Believed She Could So She Did!

How I'm learning to be happy, healthy, &confident!

My Foray Into Food Storage

Gotta Find a Home
Not an Ordinary Day

To get there, start here.

Just a girl learning that I'm perfectly normal after all these years.